Layout Update: Working on the Milwaukee Yard in Spokane

Finally an update!  Finding time for the layout in recent years has been really difficult.  Additionally, finding time for freight car projects has also been difficult.  The good news?  Here and there I have been able to work on the layout.  Also, I was lucky enough to host friend John Bauer for several days of work, as well as have hosted local friends here and there.

As posted in 2017 and 2018, the scene around Dishman WA on the layout has fully installed and operational track.

Since those last updates to this blog, some progress has been made around the corner from the Dishman scene.  Backdrop has been installed around the walls of most of the existing benchwork.  The backdrop is a mix of masonite and drywall.  Joins were made between the two with tape and joint compound.  Additionally, some fascia has been installed.  Fascia makes an incredible difference in the "completeness" appearance of the layout!

Here is a shot of the fascia as it "rises up" and covers the railroad's entrance to the helix at Dishman.  This is the line that heads downhill into the helix to head to the Coeur d'Alene and Metaline Falls staging. 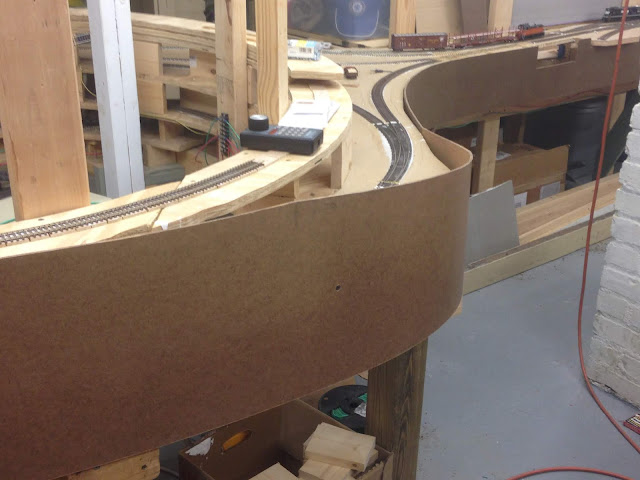 Additionally, the two freight house tracks have been installed.  The freight house will be placed in the foreground, and the Fancher Road grade crossing will be to the right of those two tracks.  The track in the background is the UP mainline from Spokane towards Dishman (and Manito).  And then behind the short masonite wall is the tail track for the future other side of the layout - for staging of a cut of cars or a train.  This track and masonite divider has been installed and has track (partially) hidden to finish it and not have to disturb this scene in a few years when I get track to that side of the layout!  Take a look here. 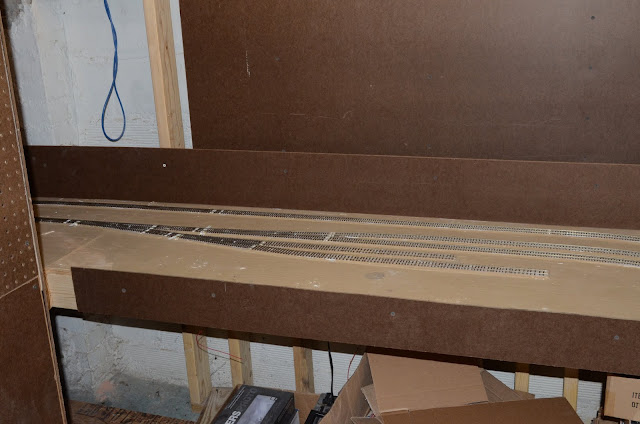 Then the layout takes a 90 degree curve - not present in real life, but necessary in a basement) to enter the yard.  This is the yard lead for the UP and Milwaukee yards, side by side.  The two tracks in the foreground are the Milwaukee lead (closest to the aisle) and main.  The old MDC Thrall coal gondola (from my childhood) sits on the aforementioned tail track for the other side of the layout. 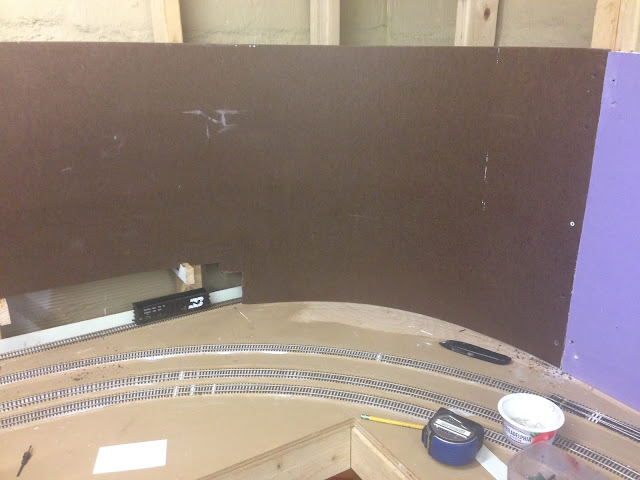 Then, the luan plywood roadbed was installed in the Spokane Milwaukee yard (as well as the two track UP visible staging yard that was right next to the Milwaukee yard, just like in real life).  Here are a few shots of the plywood east lead in the yard. 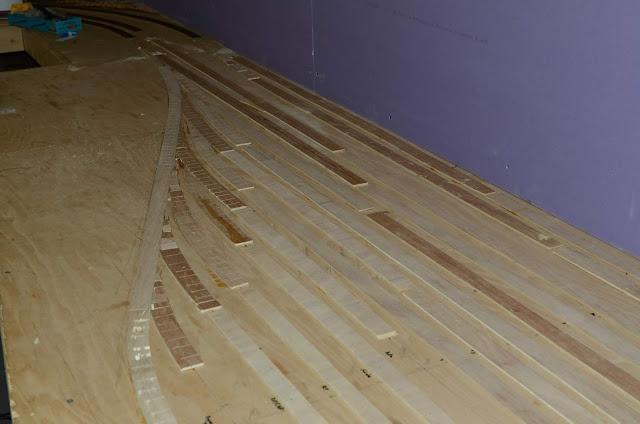 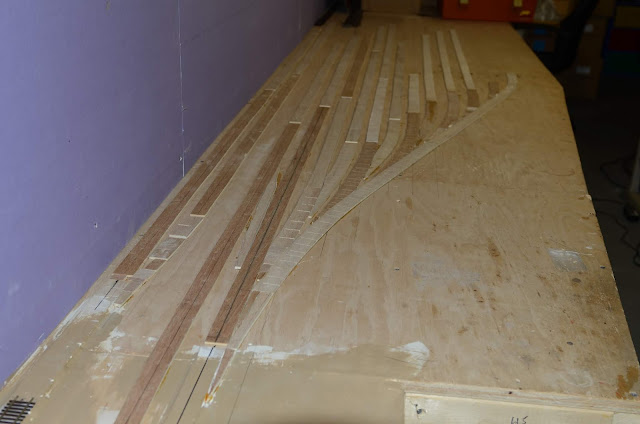 After the roadbed was put down, the next step was to lay a skim coat of ground cover, which is joint compound.  This method was utilized at Dan Holbrook's BN layout and I think it is great because you get a "semi-complete" look very quickly. 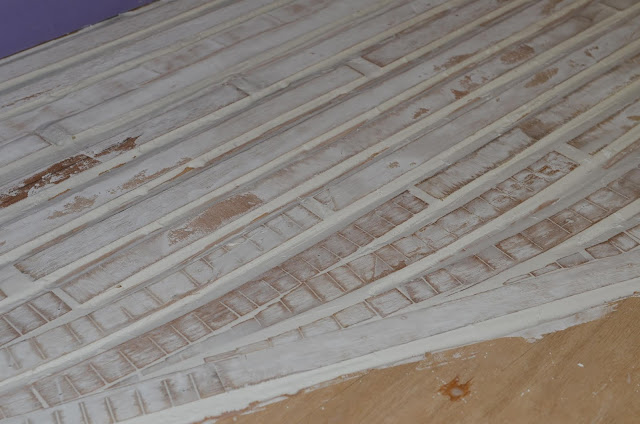 Then, the roadbed was painted with an appropriate eastern Washington earth tone before track was glued down. 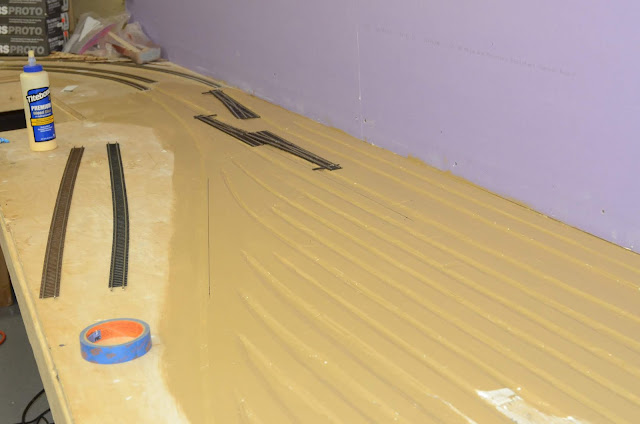 The prototypical lead for this yard had (and still has) a compound ladder that did not lend itself to commercial turnouts for most of the lead.  Instead, handlaid turnouts were required, and these were laid by friend John Bauer, who is an ace for handlaying turnouts.  Wood ties were laid on the yard lead, and then rail was drawn in pencil before rail was laid.  Normal ME flex track is used in the yard tracks, with the ties spread for that lower density rail line look. 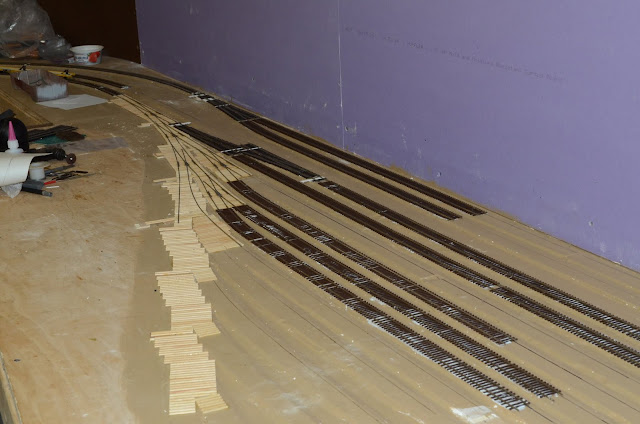 At the same time the lead was being handlaid, I installed roadbed for the west end of the yard, and repeated the same preparation process. 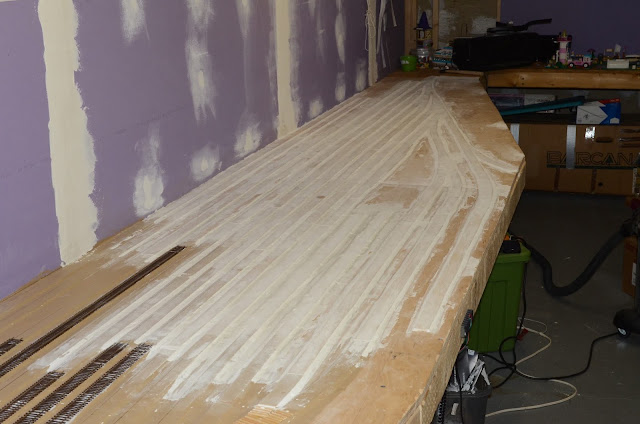 And now, here is what the yard looks like.  The entire lead is dead as a doornail from an operating perspective.  Some of the turnouts need gaps cut so I can't even turn power on to this portion of the layout without a short.  The turnouts on the lead are being prepared now.  A significant amount of wiring needs to be done, blue points installed, point jumpers installed, and frogs powered up.  And some of the turnouts need points made.  All of this prep is a significant amount of work! This is what the yard looks like now, populated with "layout ready" (weathered) cars.  Power and cabooses are not "layout ready" but you need Milwaukee equipment to keep the juices flowing, so to speak. 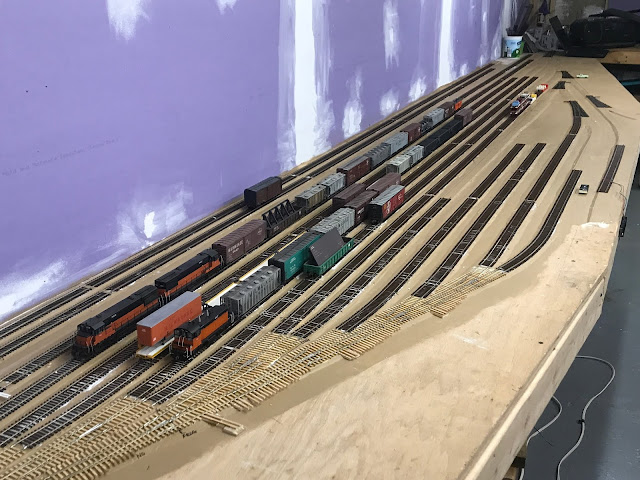 So that is the current state of the layout now.  Because we are "social distancing," I am trying to chisel a small amount of time out of each day to get into the basement and do something.  Also, time is being put toward working on equipment. I hope you are able to do the same!  Stay safe.
Posted by Tangent at 10:30 PM